HOW TO DISTINGUISH ALL GENERATIONS

There are many generations of eneloops. This is how you can tell the difference.

Sanyo introduced the AA Eneloop in 2005 with the product code HR-3UTG.

The second generation was given the code: HR-3UTGA.

The 3rd generation was named: HR-3UTGB.

From the 4th generation, Panasonic changed the product code to BK-3MCC (for the Eneloop basic AA in Japan), BK-3MCCE for Europe, and BK-3MCCA for North America.

The 5th generation, which is only available in Europe, and soon hopefully elsewhere, start with the product code BK-3MCD. But the full product code is BK-3MCDE
(The letters E and A Panasonic added are not codes for a different generation as Sanyo used to do, but merely a designed code used for which market they are sold in.) 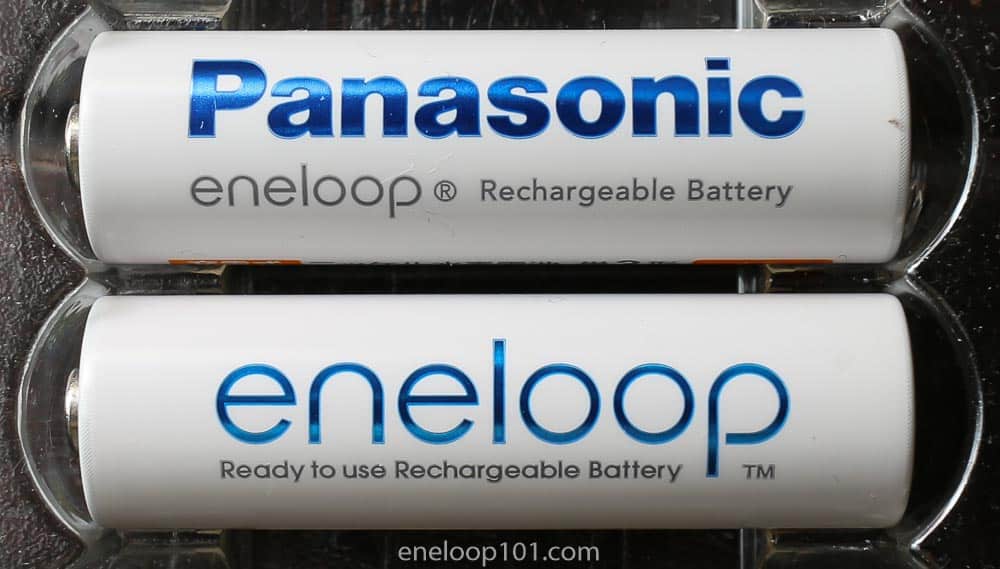 Check the following picture to see the differences:

Keep in mind that the latest upgraded 4th generation now has specs saying 70% capacity/charge left after 10 years, while the original 4th generation had 70% after 5 years. See the FAQ on what this 70% means.

The Japanese market had a make-over in 2013 and replaced the blue printed name Eneloop with Panasonic, and Eneloop underneath it in small font, as can be seen in the 2nd picture. I prefer the bottom one, of course.

Since May 2022, European sellers sell the 5th generation Eneloops. They have a higher capacity than all the previous Eneloop models. AAA batteries start at 800mAh minimum capacity and AAA batteries at 2,000 mAh capacity. This was 750mAh and 1900mAh on the previous models.

Take note that in Europe, the packaging doesn't mention any typical or rated capacity, just the Minimum capacity.

Here's a quick video of the 5th generation Eneloops. 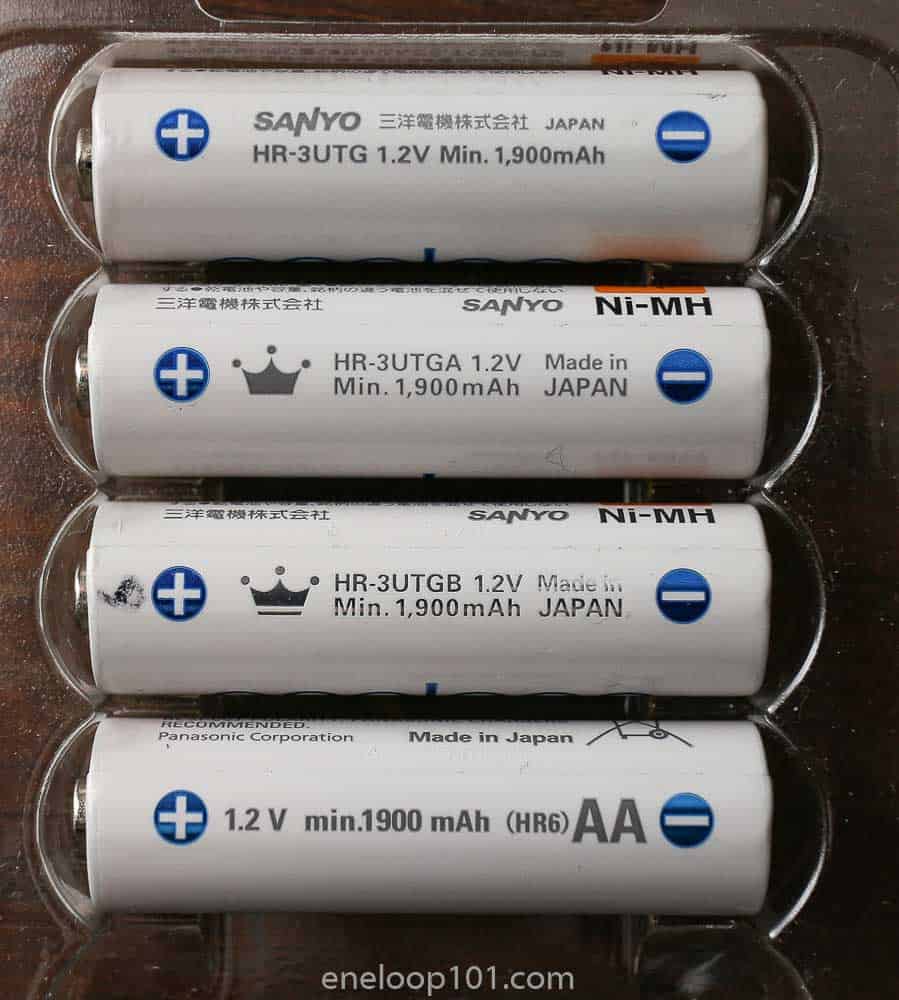 During the years Sanyo produced Eneloop batteries, they started to improve their batteries over time. When they retested the batteries and showed an increase in quality as in increased cycle life, they changed the product code.
The 2nd generation AA was called HR-3UTGA. So we, as consumers, used these specs of increased capacity or increased charge cycles in combination with the new product code as a new generation!

This does not mean that when a new generation was announced, they stopped producing the previous generation. I believe, and my little research confirmed this, that they at least produce 2 (probably even 3) generations at the same time.

Let me explain this:

In 2013, (when I still lived in Japan), I followed the change closely of the Panasonic Eneloop make-over in the Japanese market. At that same time, overseas sellers were still selling Eneloop batteries from a previous generation BUT with the same production date. This confirmed my understanding of the whole generation thing not being an age/production year thing, but a quality thing.

The product codes are now related to the different worldwide markets.

Panasonic decided in 2013 to change the labeling and coding of their Eneloop batteries. This resulted in completely new product codes.
BK-3MCC for the AA standard model.
(BK-3MCCA for the American market, and BK-3MCCE for the European market). From 2013 onwards the last letter of the product code was not a designation for a new generation anymore.

And to add to this confusion, the product code BK-3MCCE is also used for the Eneloop batteries that are made in China, for the East Asian, Oceania, and South American markets.

During an interview with a few Eneloop technicians I received the following answer to the question:

What’s the real difference between the various generations?

Is it the manufacturing process, quality control, and difference in raw materials? If the same, was it just a discovery
that they were better than originally thought and the cycle life number was just updated?

"The manufacturing process and processing of base materials were improved over time."

And this time Panasonic decided to keep the same product code, BK-3MCC for their AA batteries.

And one more thing added to the confusion. This was the difference between the packaging of the Chinese Eneloops in the Oceania region that until 2015 showed a 65% remaining charge left after 5 years, and now showed 70% remaining charge left after 5 years.
So at that time, it was sometimes difficult to distinguish from the package whether the cells were made in Japan or in China.

Is there a 5th generation standard Eneloop?

Yes, finally there is a 5th generation Eneloops, as of May 2022.
To keep consistent with appointing 'generations' we look at the Product Code. If you check the overview page, you can see they changed codes during the years. The 2013 standard version is called BK-3MCC .In 2015 the specs changed to 70% charge remaining after 10 years. So it is hard to grasp that they actually tested 10-year-old cells (so they are supposed to be 1st gen) or it is a scientific calculation (which it is).

Formerly I believed they were tested under different JIS standards, but a very helpful member, Vikin on CPF helped me to understand they used the same standards but were written in different paragraphs.
Btw: JIS stands for: Japanese Industrial Standards.  JIS uses the same standards as IEC by the way.

There are sellers who sell 5th generation Eneloops, and although I myself used to call them that way, I stopped doing this because of the coding.

Now, if you look closely at my complete Eneloop lineup you can see that I called the Eneloop XX/PRO HR-3UWXA a 2nd generation battery, but this was actually the same battery as the HR-3UWX which was being sold worldwide. The 3UWXA was only sold in a certain market in Asia.

To keep the consistency of generations, I had to call them a different generations, otherwise, things would be really confusing. Therefore the PRO version is actually 1 generation ahead of the standard ones at this time of writing. With their latest version now being the BK-3HCD (E/A)

There had been some confusion about the little venting holes that can be found on certain generation batteries.
Since the first generation Eneloop had 4 venting holes at the Positive side of the battery.

They continued this with their 2nd generation in 2009, until November 2010, when they started to ship them without visible venting holes for standard AA eneloops.