What do they stand for?

The numbers 1, 2, 3, and 4, used in the product codes on all Eneloops, as in HR-3UTG /BK-3MCCE /BK-4HCD are simply stating the size of the battery. These numbers are used on all batteries in Japan.

単三 : Tan-San (san means three) which is the 3rd size. We call these AA batteries.

単四 : Tan-Yon (yon means four) which is the 4th size. We call these AAA batteries.

Take note that some foreigners get confused while shopping for batteries in Japan because of a mixup between size 3 = AA and size 4 = AAA. 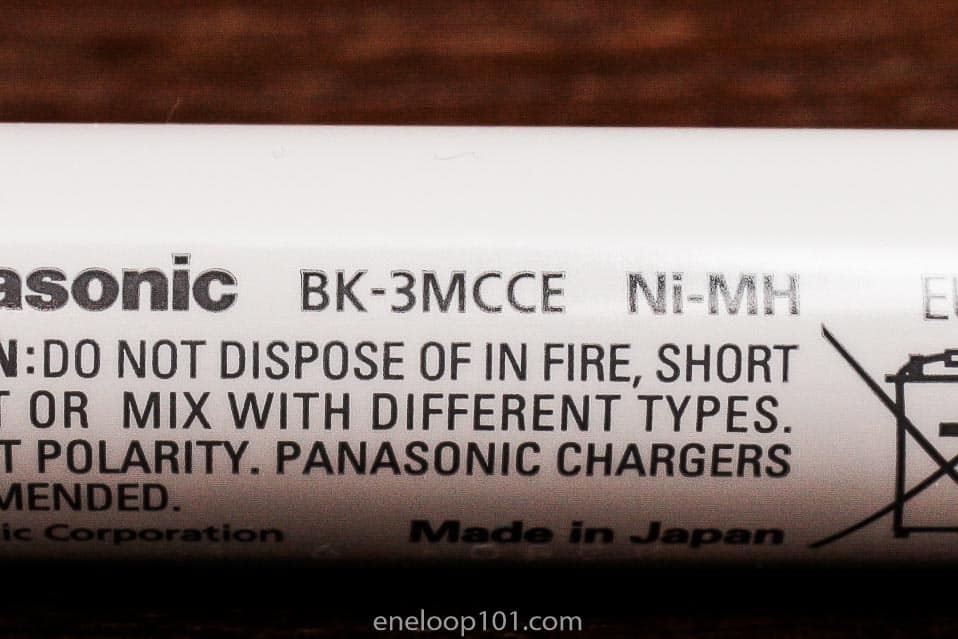 Made in Japan vs Made in China

When you look closely at the overview page, you can see that in 2013 Panasonic started coding its batteries differently specifying the market region.

I will take the AA versions as an example.

If you are living in one of the above-mentioned markets, you can see where your Panasonic Eneloop batteries are sourced from. When you live in the US and you buy from an authorized seller you wouldn`t get any Chinese cells.
But when you live in Australia you can only buy Japanese cells when they are imported from other markets, and not through the authorized Panasonic dealers.

If you really want to make sure

* Note that the BK-3MCCE code is the same in different regions, even though one is sourced from China, and the other is from Japan. Independent tests suggest that Eneloops produced in China are inferior to Eneloops produced in Japan. See the Test page.  As stated above, when Eneloops with an E at the end of the code is purchased in Europe or Russia from authorized resellers, they will be sourced from Japan.

*2 BK-3MCCW these are the same as BK-3MCCA, BK-3MCC, and BK-3MCCE. The only difference is that they are not available in normal blister packaging, but in bulk only. Therefore they can be found in certain consumer products like the Logitech G700 mice. Since they are identical, you can replace them with any other Eneloop, 3MCCE, 3MCC, or 3MCCA. Keep in mind that BK-3MCCW can be made in Japan as well as in China.

*3 BK-3MCCE/4BT , or BK-3MCCE/4ST: the annotation behind the slash / differ per package, per region. So you don't need to look at those, just at the 4-5 letters after the letters BK-.

Panasonic uses codes to indicate when a battery was produced. This started when Sanyo still produced the eneloop battery.
Every original eneloop battery has a production date, embossed on its side, just above the battery jacket seam. You can easily decipher it.
(If your eneloops have no code embossed on the side, or the code is printed, yours are likely counterfeits.)

The production code doesn`t have any color so you have to check where the seam is, and look up close.

Take a look at the pictures below.

The battery has the following code: 16-08 xx

The next 2 numbers indicate the month: 08=August

So this battery is a 4th generation Panasonic eneloop battery produced in August 2016, in Japan.